Corinthia By The Sea – Design Tour 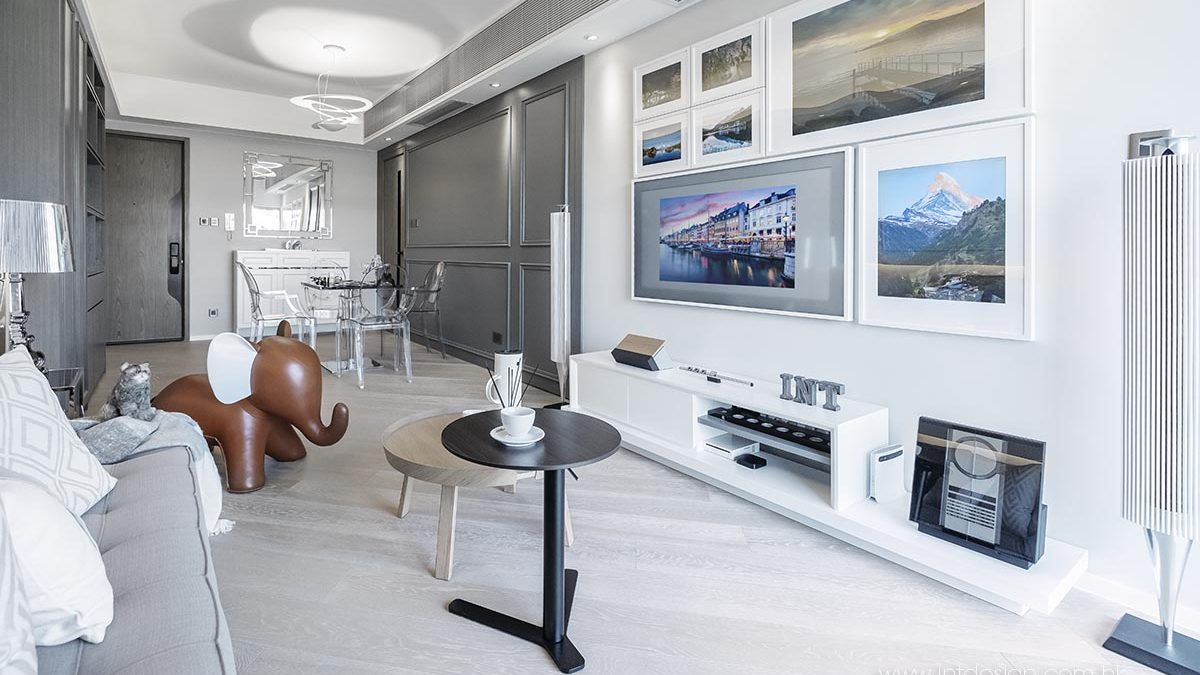 The newly-developed housing estate Mount Pavilia is located in the Sai Kung District of Hong kong. There is no need to show off your posh lifestyle with extravagance. The male homeowner is a big fan of music and Italian-designed furniture, while the female partner prefers baking at home and collecting luxurious handbags. Our home interior design specialist Jacky fulfilled the couple's daily needs with a classic and refined design, grey-white colour scheme, and bespoke furniture arrangments. It helped to present the lifestyles of the couple. It also embodied a well-balanced design that hits the spot.

Gray and White, Posh and Neat

Since the couple shares the same space, the home interior designer must consider their hobbies and real needs. Jacky admitted that our customers are picky about their lifestyles. The male owner owns a Kartell dining table and chairs. His nightstands are also by Kartell. Therefore, Jacky planned to tailor this apartment to a posh and classic fit in line with the original furniture.

At first, Jacky offered two home interior design options to the homeowner couple. One is an all-grey style. The other is a marked contrast between grey and white. In the end, they all agreed to set a specific motif for each space in the apartment. Therefore, the colour scheme of grey and white is widely used in the lounge. A close-up wall and ample cabinets in the dining space are decorated with nut-brown and grey colours, which creates a stark contrast with the white parlour. So there is a clear distinction between the two spaces.

The furniture in the dining space is designed by Philippe Starck, including the Louis Ghost dining table and Kartell chairs. These items all have square and circle shapes. To match the furniture's design, Jacky picked up a ceiling lamp from the Italian brand Artemide which contains an arc structure with spiral shapes and aluminium-made materials. A full-height storage cabinet against the wall is decorated with classic flower patterns to neatly fit the Louis Ghost furniture's classic shape. Its shelf boards with mirror steel ornaments make the whole space look posher. In addition, the combo is equipped with display stands, closed cabinets, and even a gateleg table for the female owner to bake at home.

Although the cupboards occupy ample space in the living and dining rooms, why isn't the limited space oppressive? Jacky explained that "The trick lies in the close-up wall built behind the sofa. A beam about 4 or 5 inches long next to the ceiling. However, it might have an abrupt effect if it is just covered by wall washers. Therefore, I added a wall with flower patterns as wide as the beam is. The LED lighting is installed for layering. It does not only adorn the beam but also conceals part of the cupboards, thus making the whole unit look more dainty. "

Apart from the close-up wall behind the sofa, the TV wall designed like a mini gallery is also a clear focus in the lounge. Jacky said, "Our homeowners only watch TV for daily news. They don't use it often. So I suggested they buy the Frame TV from Samsung. It can be applied as a digital frame to display art collections or treasured photos when the owners don't use it for watching. Combined with the photographs made by the couple and the memory wall composed of other frames, this spot becomes an exclusive view in the lounge." The TV cabinets and the wall are both coloured in white to serve as a low-key, but simple background against those frames and the B&O white floor stand speakers the male owner recently bought. Each detail is conscientiously arranged and hits the spot.

The room design also applies the classic and posh style in the lounge. Owners can get out of bed on both sides. A pair of Kartell Componibili three-layer cylinder nightstands sits at each bedside. The designer used a golden circular chandelier as a foil. The extra tall headboard is mounted with sponge wallpaper and bordered with mirror steel, thus making the whole space noble and luxurious.

The apartment was initially designed with three rooms, which might be a waste for this couple. Therefore, the interior designer suggested merging the bedroom next to the toilet with the primary bedroom and adding a group of showcases between the bedroom and the cloakroom, letting the female owner show her valuable luxurious handbags and helping her decide on her daily outfit. Jacky added that closed cabinets underneath the display cupboards that can be used for storing handbags that are not often used. Therefore, the whole showcase zone looks neat and attractive! 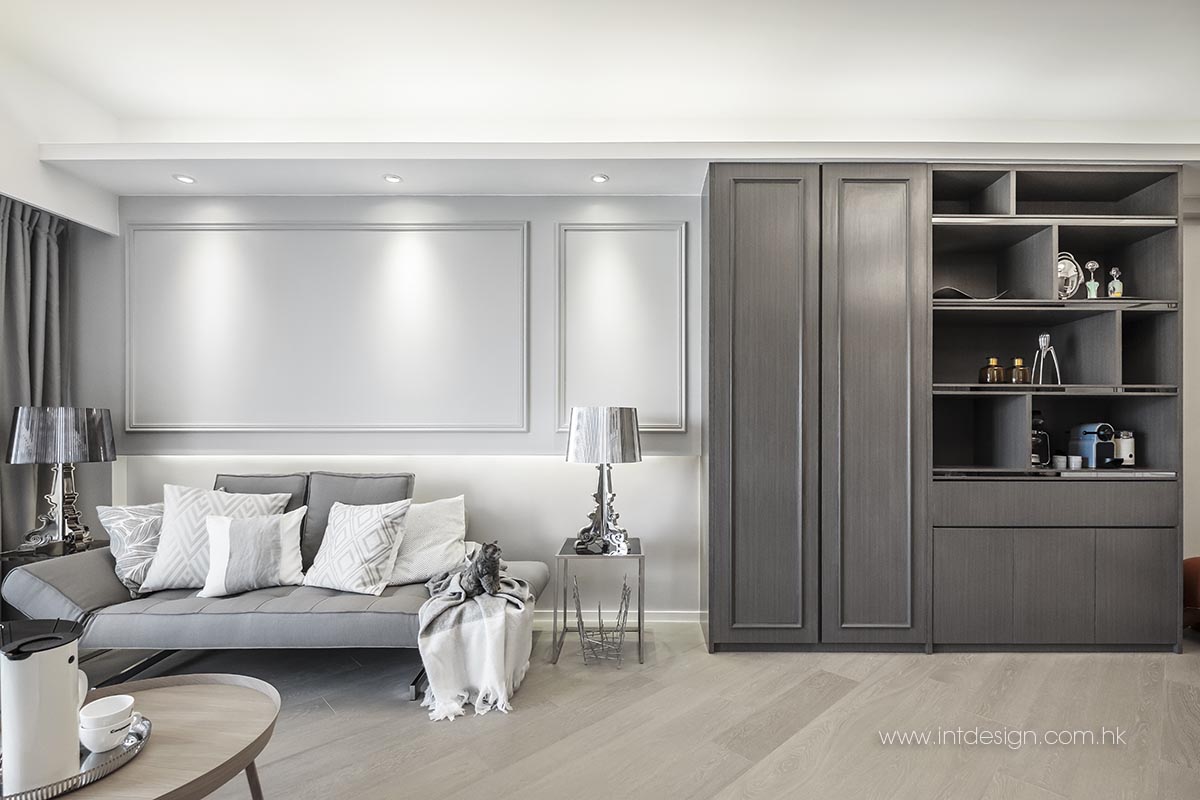 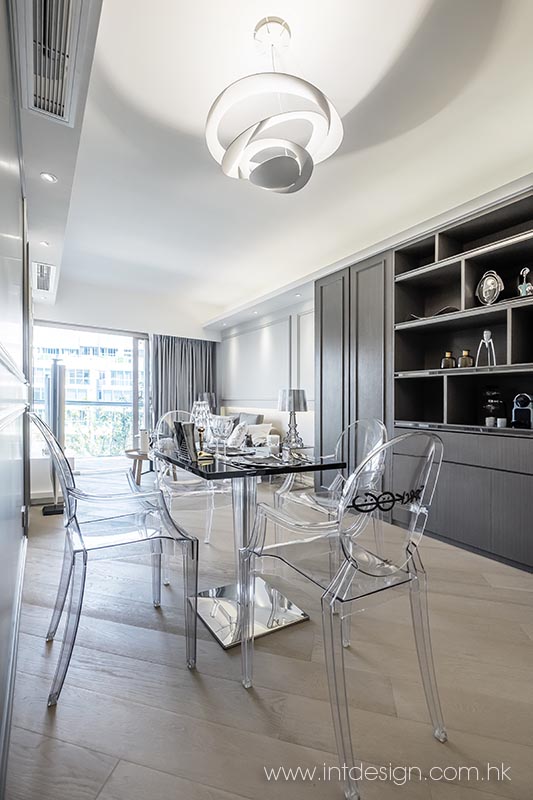 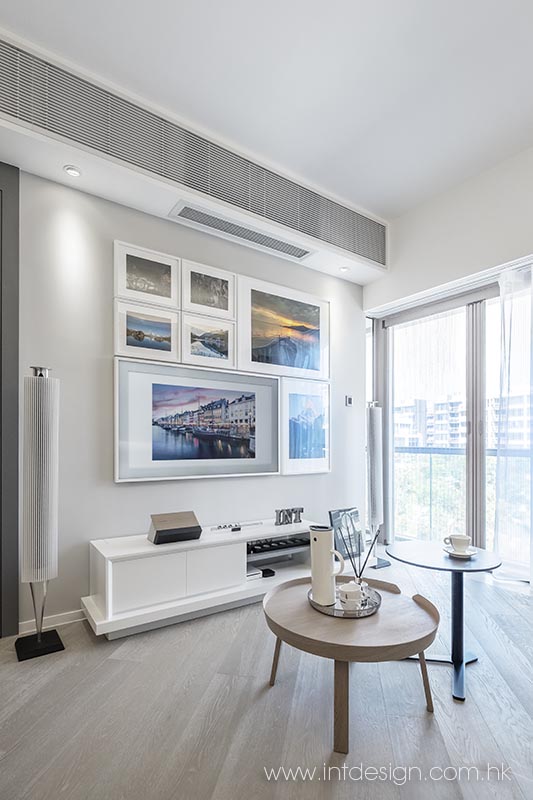 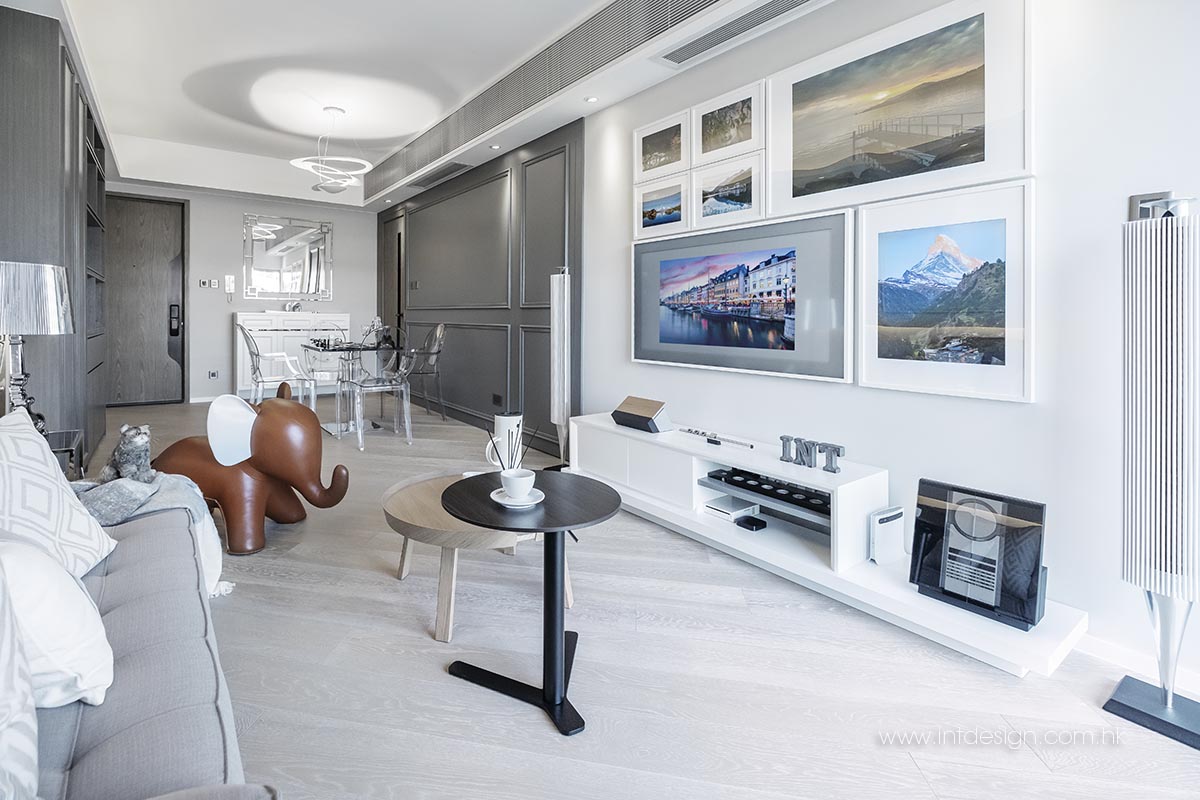 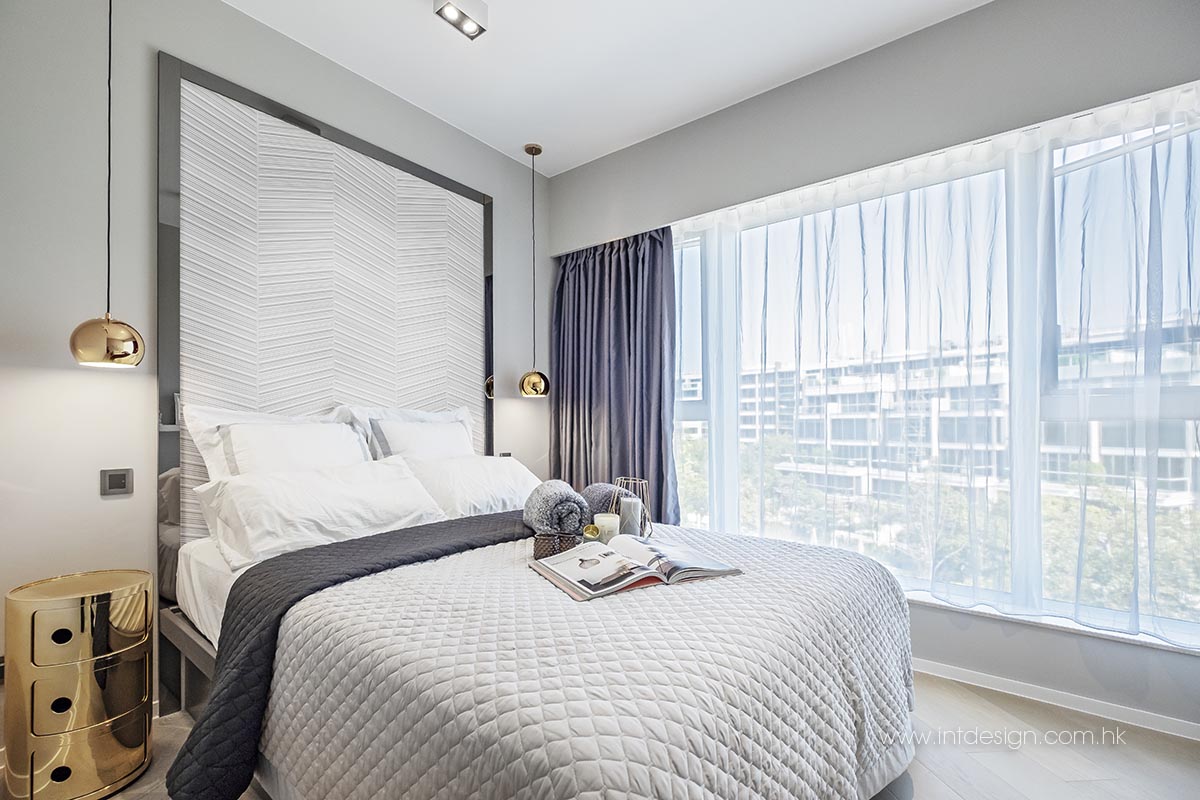 Mount Pavilia - Before & After 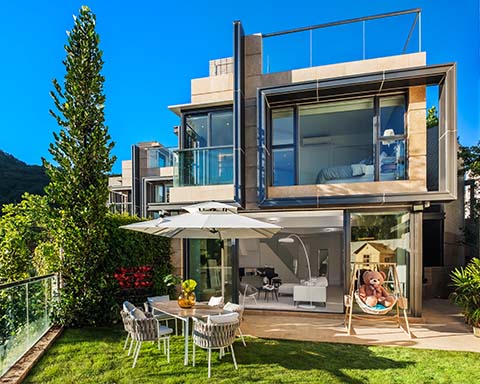 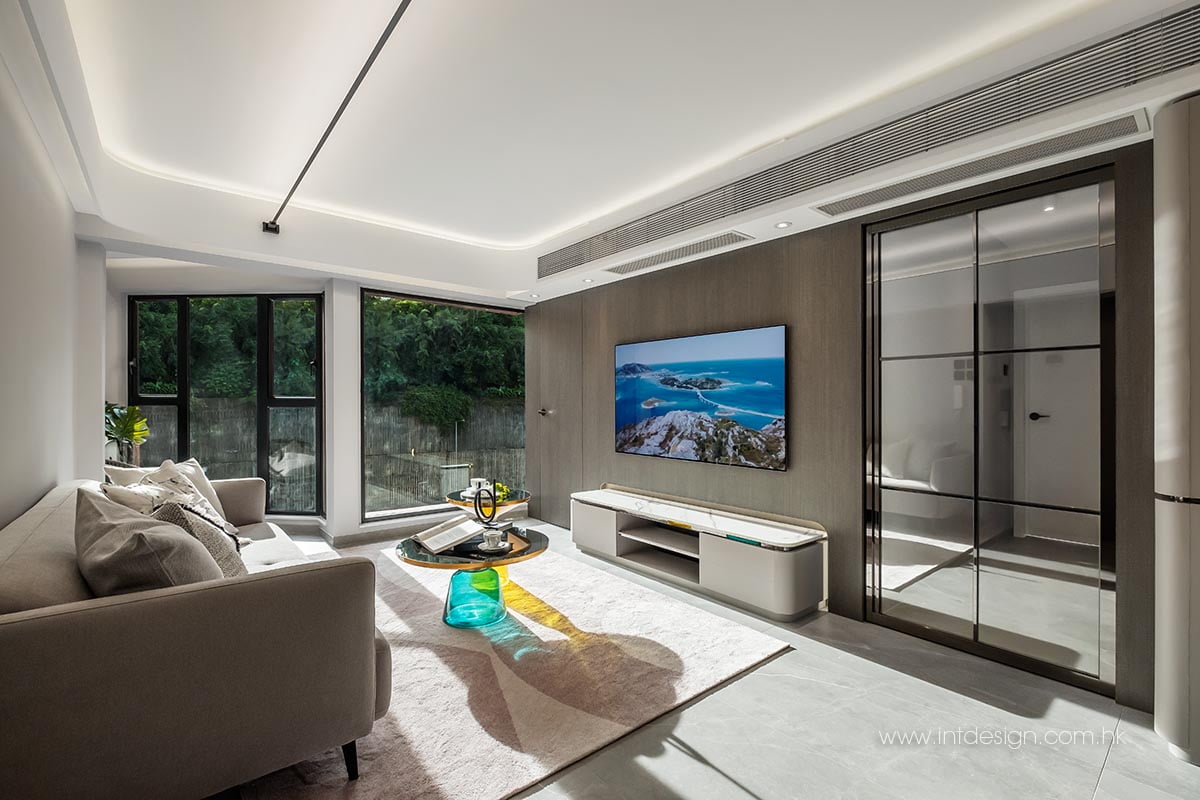 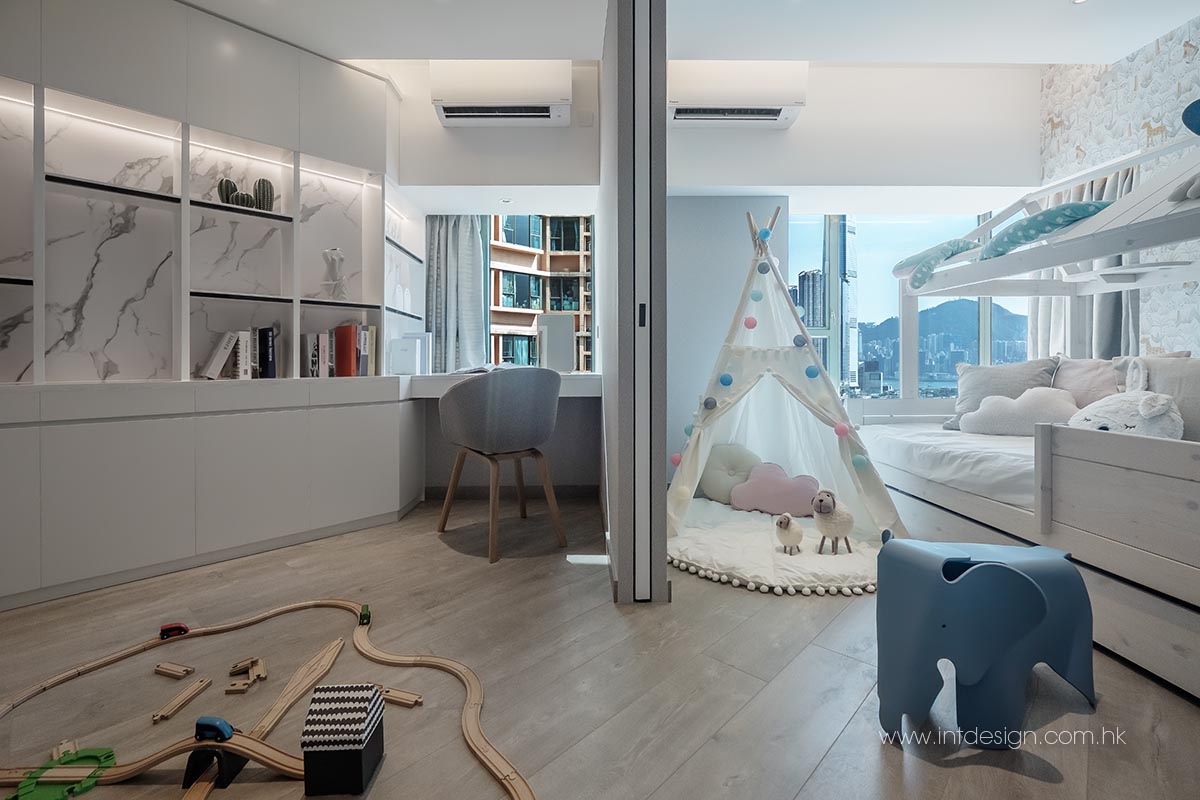 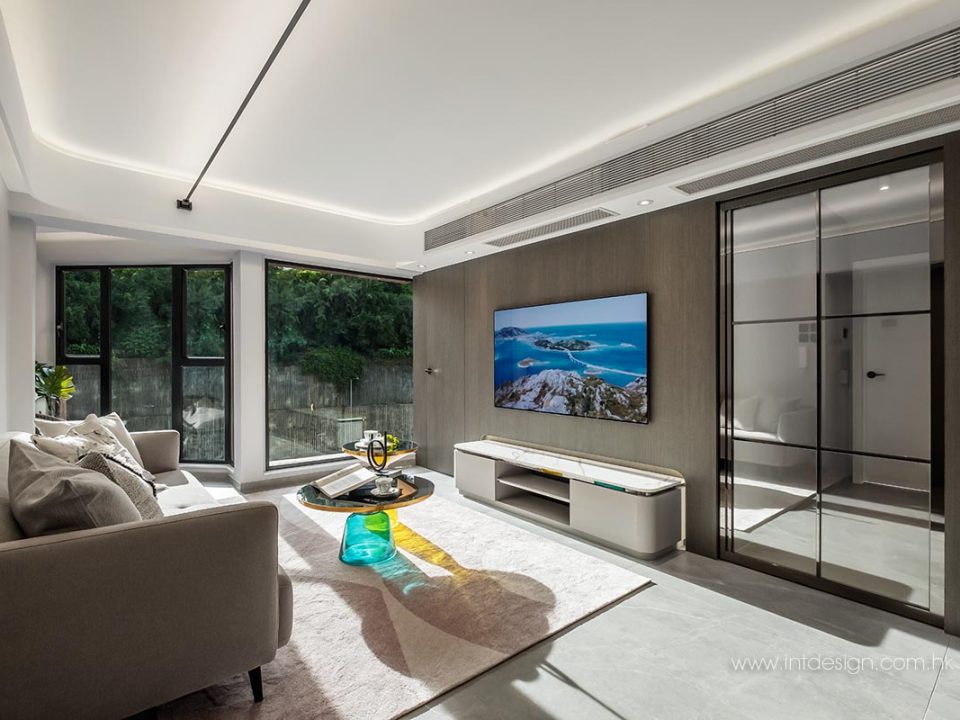 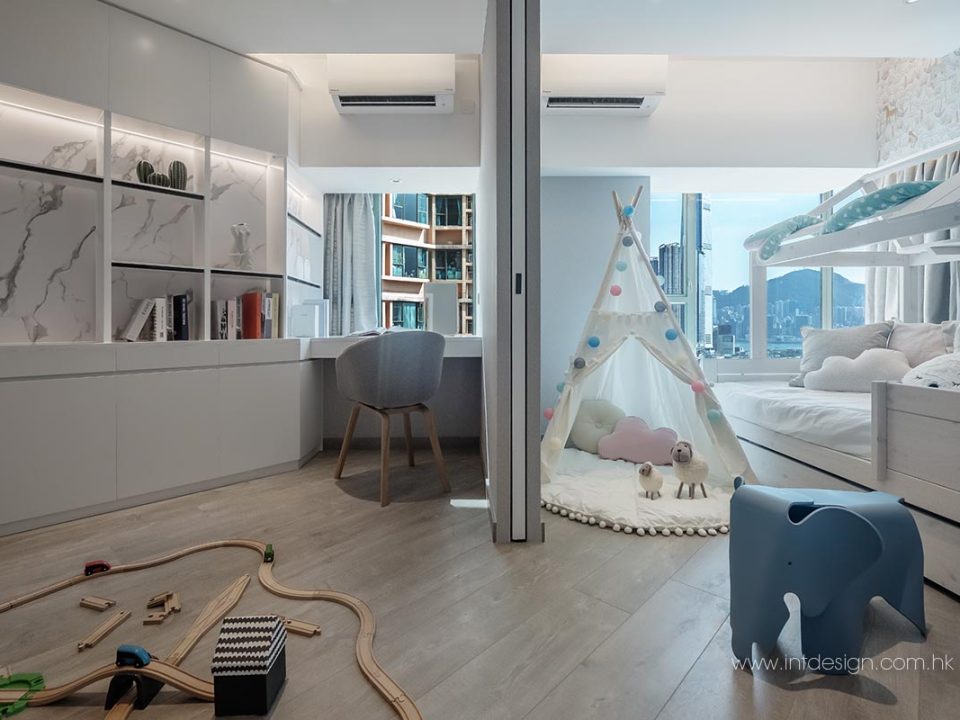