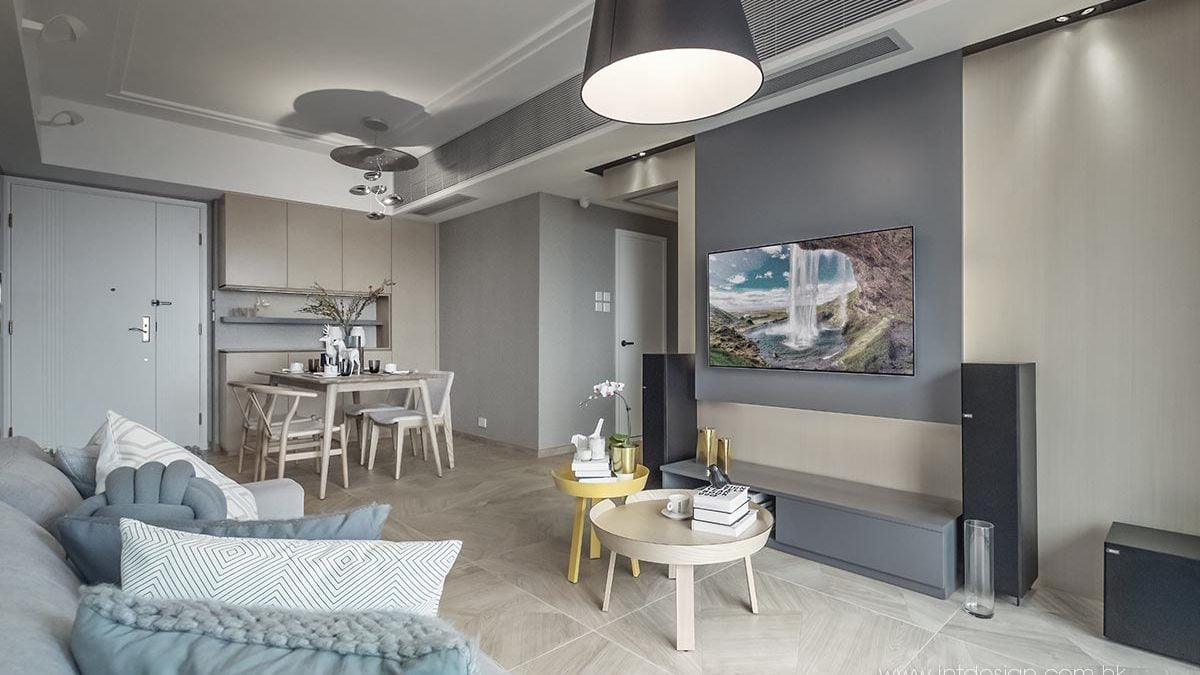 While the Japanese design aesthetic continues to be popular amongst Hongkongers, the minimalistic Nordic design style has taken Hong Kong by storm in recent years. inT Design Furniture Limited seamlessly blended the two styles in a Parc Palais unit in Kowloon, owned by a young couple. The three-bedroom unit’s Japanese-style interior was inspired by the husband’s time spent studying in Japan. However, given the spaciousness of the unit, director of inT Design Furniture, Jacky Lee, suggested that using a Japanese-style design wouldn’t serve the space well, and advised implementing a Scandinavian design too, which the wife originally preferred. From there, it became the guiding spirit while incorporating the natural elements of Japanese design, satisfying the design preferences of both spouses.

The unit’s floors are covered in wood grain tiles with geometrical shapes, a nod to both the Nordic and Japanese design sensibilities, Meanwhile, the walls and furnishings are in various shades of charcoal, giving the home a simple yet layered visual effect. From the geometric decorations on the walls, to the cushions and the hexagonal bathroom tiles, strong influences of the chic Scandinavian style can be found throughout the home.

As the husband is an avid toy collector, Lee reserved a lot of space for displaying and storing his toy collection. Lee also installed two sliding doors in the study that go in opposite directions so that the large glass display shelf can be seen from both the dining room and the living room. The raised platforms in the study and the bedroom were designed so that the husband would have space for his collection. With an elevated platform that is at the same level as the windowsill, it gives the optical illusion that the large windows extend from the floor to ceiling.

To create a dramatic visual play of lights and shadows, inT’s Lee hid the ceiling beams with air conditioning ducts and employed light reflectors on the ceiling, enhancing an otherwise blank ceiling space. In addition, the dark grey, mirrored shoe cabinet at the entrance and the white ceiling generate a striking contrast, while the kitchen entrance was modified so that it would fit a U-shaped kitchen cabinet instead of an L-shaped one, making it more convenient to store kitchen appliances. 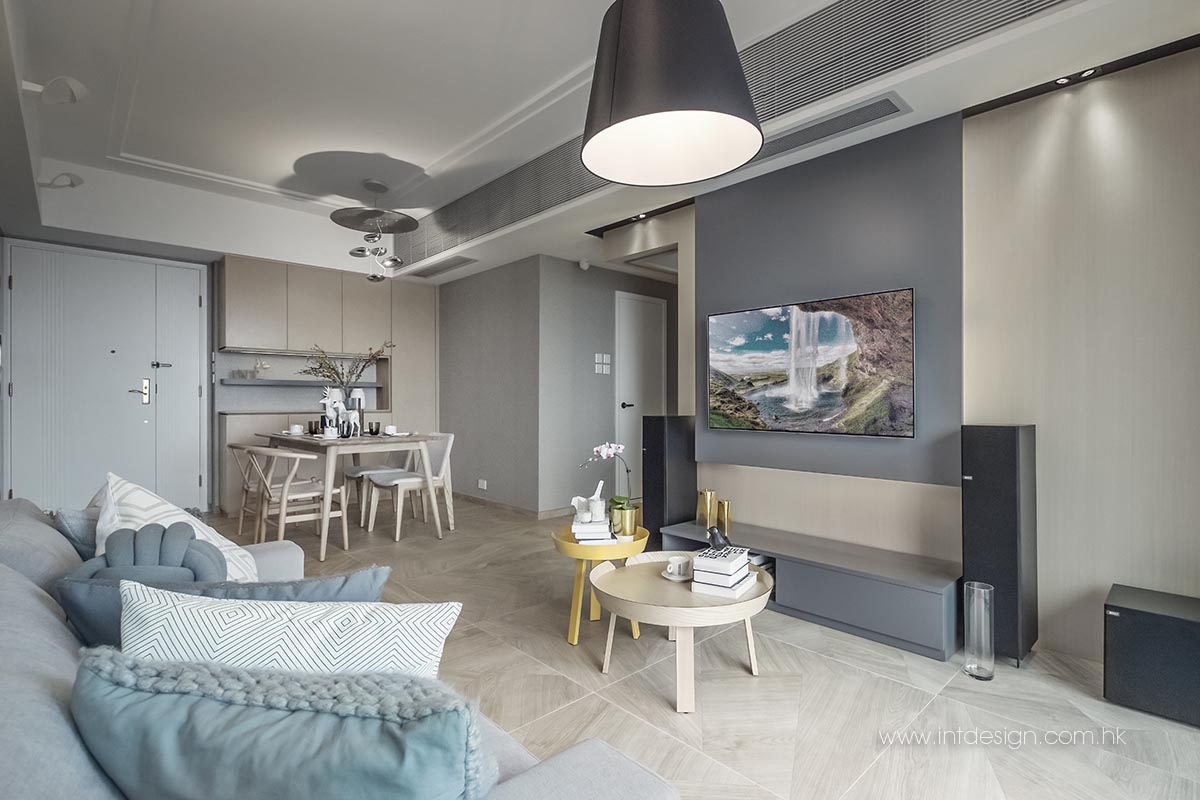 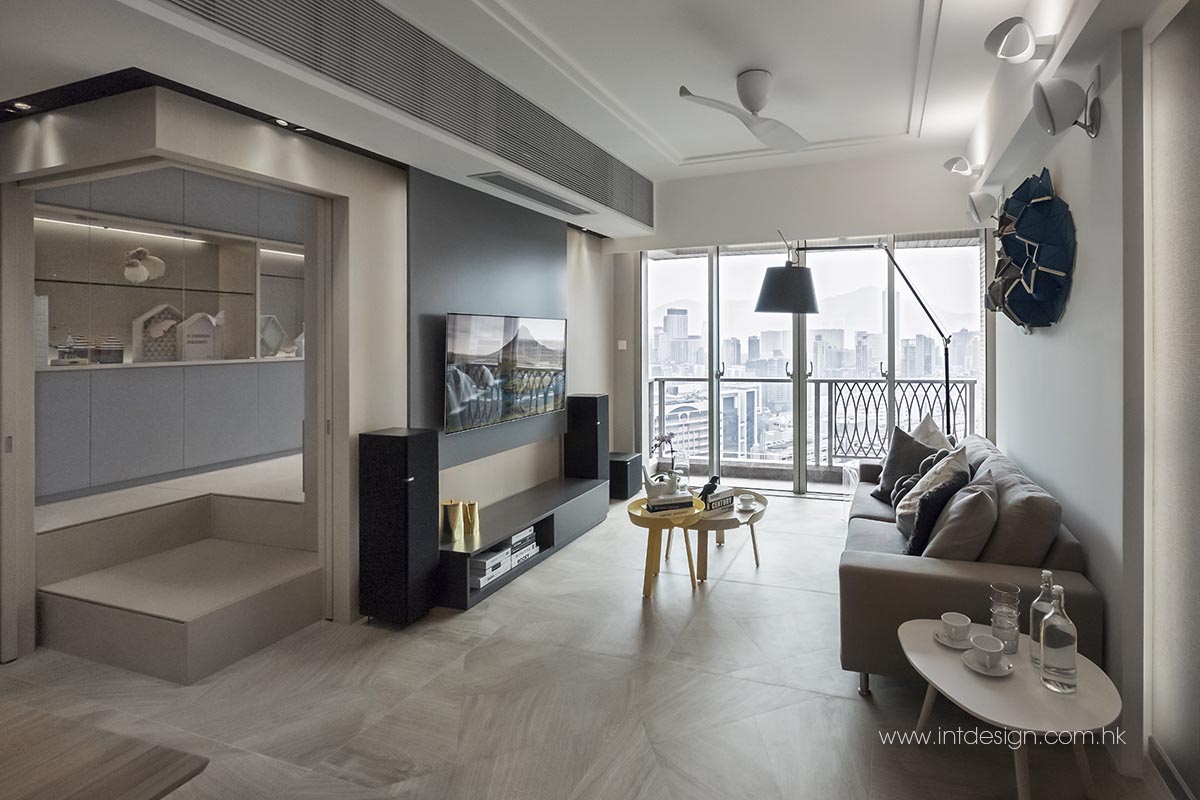 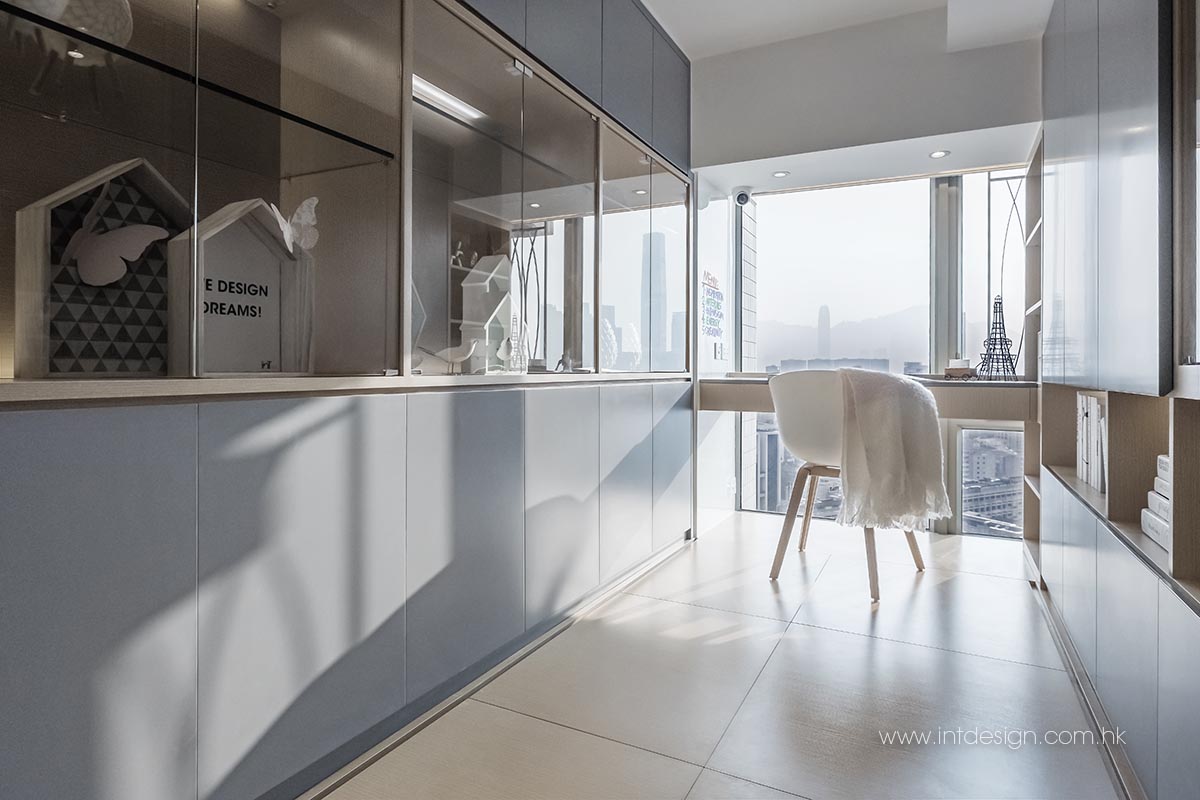 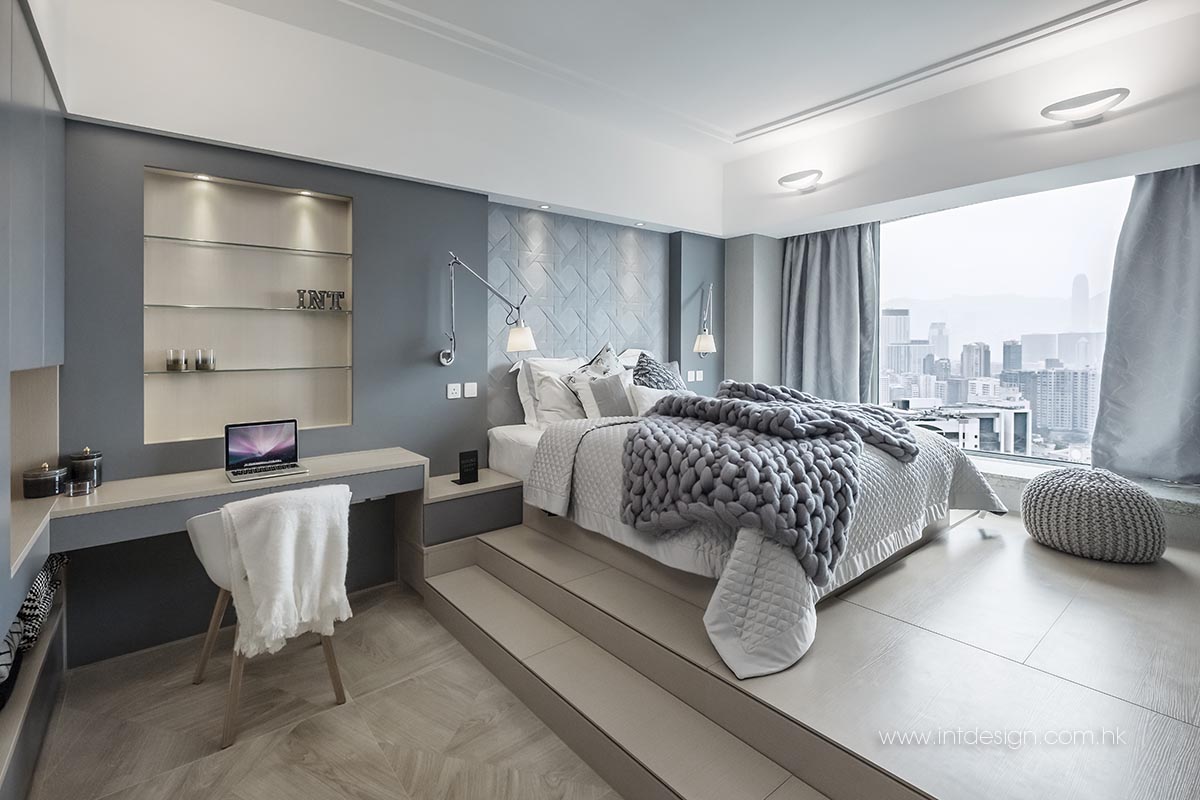 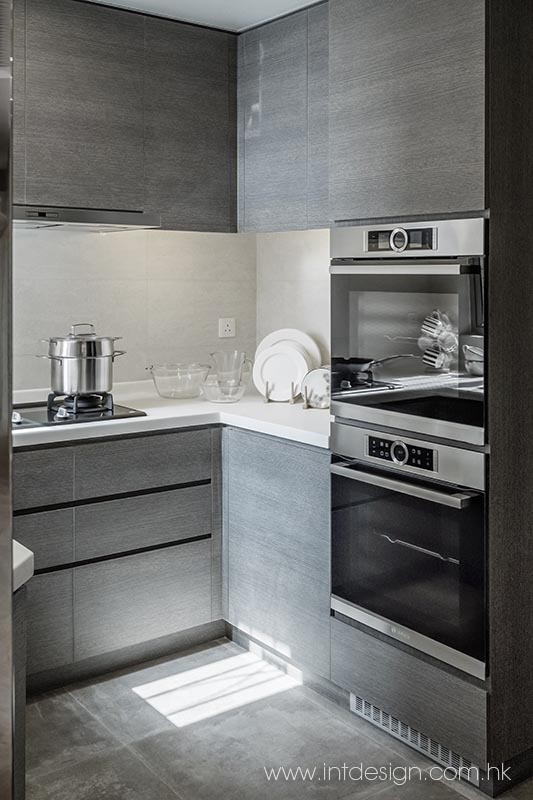 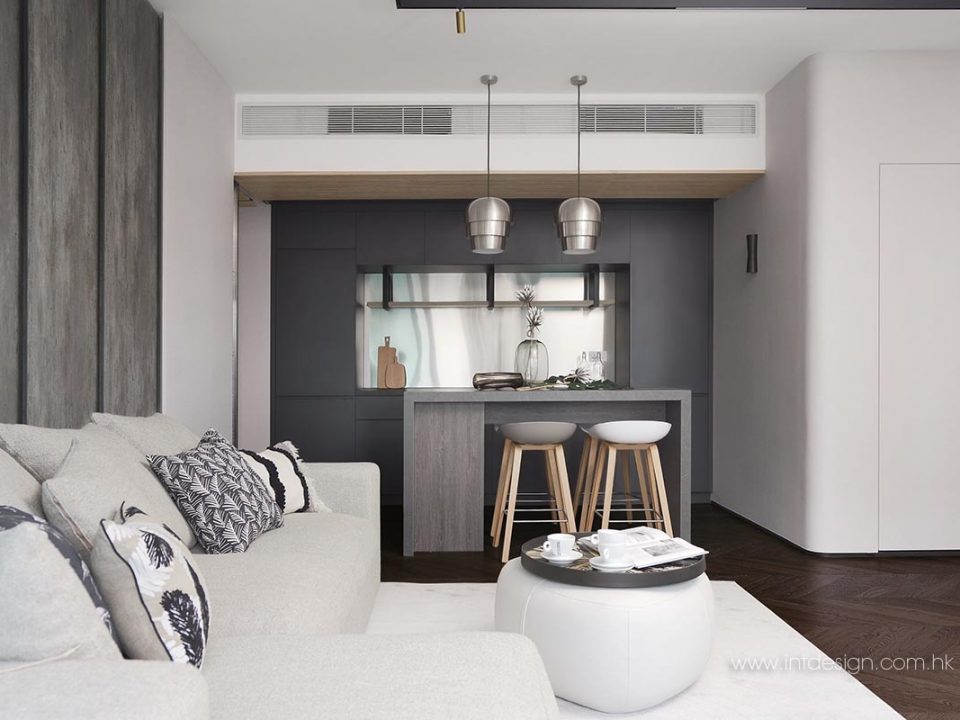 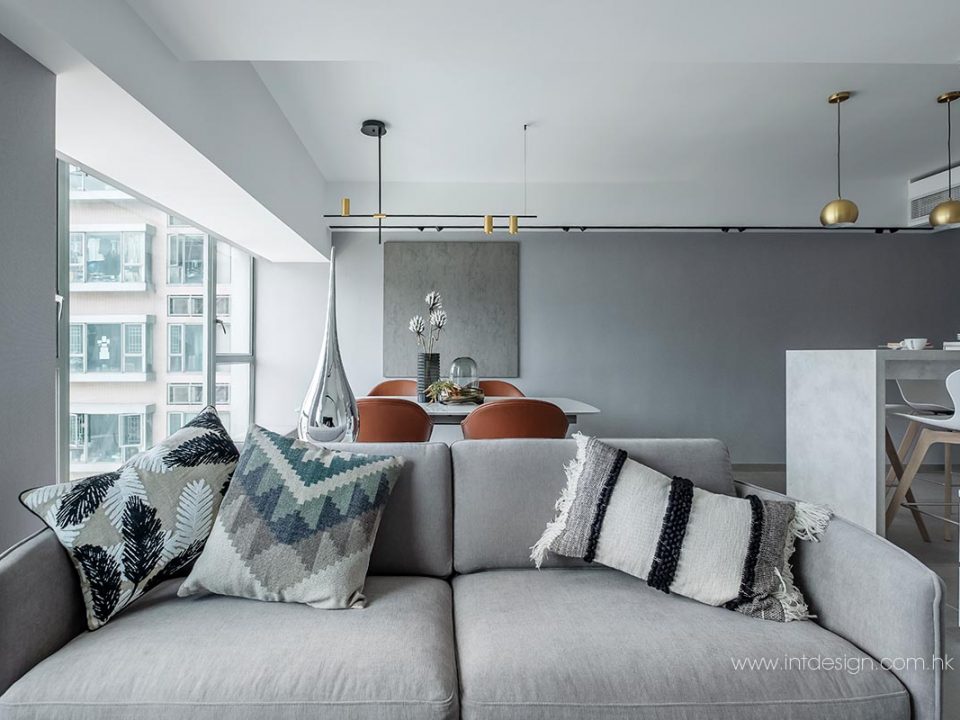 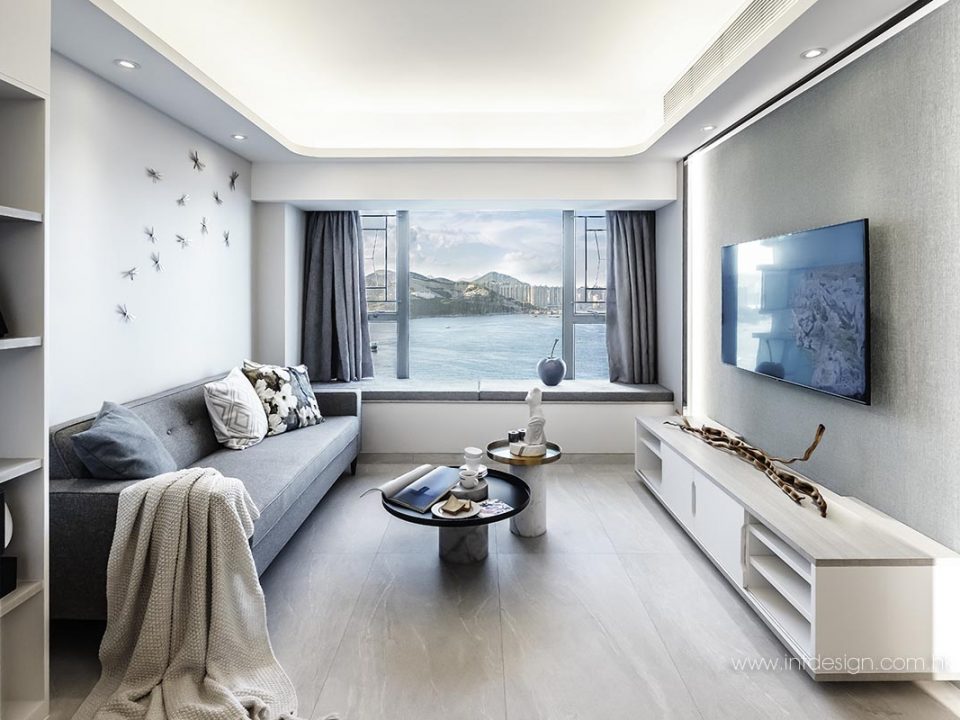